Russia mobilises for assault on Kyiv as its troops storm Ukraine

Vladimir Putin’s forces are mobilising for an overwhelming assault on Kyiv after Russia stormed Ukraine and unleashed one of Europe’s largest military offensives since the second world war.

After air and missile strikes, Russian troops launched attacks from Ukraine’s northern border with Belarus, across its eastern frontier and in the south from Crimea, the Ukrainian peninsula that Moscow invaded and annexed in 2014.

Columns of tanks and armoured vehicles rolled into the country from all three fronts, while fighter jets, airborne troops and dozens of helicopters attacked a critical airport outside of Kyiv. Senior western officials warned that Russia was assembling an “overwhelming force” to take the capital, potentially within days.

Two large explosions were heard in central Kyiv in the early hours of Friday morning, a Financial Times reporter witnessed, as the capital came increasingly under attack by Russian forces. Ukraine’s land forces said Russia fired at peaceful areas of Kyiv but the strike was intercepted.

Volodymyr Zelensky, Ukraine’s president, said that “enemy saboteur groups” had entered Kyiv and that Russia planned to assassinate him.

“According to our information, the enemy has identified me as the number-one target. My family is the number-two target. They want to destroy Ukraine politically by destroying the head of state,” he said.

Shocked by the ferocity of Russia’s assault, world leaders addressed their nations to condemn what they cast as the most momentous challenge to the postwar order in Europe for 80 years. “[Putin] has much larger ambitions than Ukraine,” said Joe Biden, US president. “He wants to, in fact, re-establish the former Soviet Union. That’s what this is about.”

Biden said the US and its allies would impose new sanctions in response to Russia’s aggression. “Putin chose this war and now he and his country will bear the consequences.”

Roads out of Kyiv were gridlocked with civilians fleeing the capital, while city authorities ordered residents to seek refuge in basements and bomb shelters.

Zelensky called on “everyone with battle experience” to take up arms and resist forces that had invaded “just as fascist Germany did”. He later ordered a full mobilisation of the military.

The Ukrainian president said 137 Ukrainians were killed in Thursday’s fighting. Russian forces lost more than 30 tanks, up to 130 armoured vehicles, seven planes and six helicopters, according to the commander-in-chief of Ukraine’s armed forces, Valeriy Zaluzhny. He estimated that between 30,000 and 60,000 Russian troops were in Ukrainian territory.

Ukraine’s Ministry of Defence said that as of 3am on Friday, its forces had killed roughly 800 “enemy” personnel since the Russian offensive started.

Putin and Emmanuel Macron, France’s president, discussed the invasion in a telephone call, the Kremlin said, the Russian president’s first conversation with a western leader since he recognised separatist states in eastern Ukraine and launched a full assault on the country.

The leaders had a “serious and frank exchange of views about the Ukraine situation”, the Kremlin said in a readout. “Vladimir Putin gave extensive explanations of the causes and circumstances of why a decision was taken to launch a special military operation. It was decided to remain in contact.”

A French official said Macron called Putin just before an EU summit in Brussels to demand “the immediate halt of Russian military operations and reminded him that Russia was exposing itself to massive sanctions”.

In a televised address, Zelensky, who said he remained in Kyiv, thanked western leaders for their support but questioned their willingness to go further. “Who is ready to fight with us? Honestly, I don’t see anyone . . . I’m asking them, are you with us?”

Alarm over the conflict ripped through international markets, with the price of European natural gas contracts jumping as much as 70 per cent to €142 per megawatt hour. Russia is an important producer of raw materials, with Europe relying on the country for about a quarter of its oil and more than a third of its gas.

Brent crude prices rose to more than $105 a barrel, the first time the international oil benchmark has crossed the $100 threshold since 2014. The price dropped back to about $99 after the Biden administration announced a raft of sanctions that focused on Russia’s financial sector, rather than its energy industry, which is an important supplier to many western countries.

The pattern of Russian incursions suggested its forces aimed to advance south towards Kyiv while simultaneously encircling Ukraine’s forces in the east by cutting through the country from the Russian border to the Black Sea. Ukrainian authorities reported scores of casualties in fierce fighting across the country.

One senior US defence official said the initial campaign was “clearly designed to take key population centres”, with the intention of ultimately “decapitating the government” in Kyiv.

Russian forces pushed for control over territory around the regions of Chernihiv in the north, Kherson in the south and the major north-eastern city of Kharkiv, which saw some of the heaviest fighting on the first day of clashes.

Jens Stoltenberg, Nato secretary-general, condemned Russia for shattering the peace in Europe with a “brutal act of war”. In an emergency meeting, the US-led military alliance decided to deploy additional land, air and sea forces to bolster its eastern flank with Russia.

A US defence official said the Pentagon would send 7,000 more troops to Germany. The purpose of the deployment was to “reassure Nato allies, deter Russian aggression and be prepared to support a range of requirements in the region”.

In an address on state television on Thursday morning, Putin said that Moscow would “de-Nazify” Ukraine and “defend” victims of “genocide”, despite there being no evidence of such crimes.

Europe braced for a humanitarian crisis in the aftermath of the invasion. Slovakia said that its border with Ukraine was open for “all persons fleeing this war”. The US has warned that as many as 5mn Ukrainians could be displaced.

The Russian assault began with missiles, launched from land and sea, hitting about a dozen airfields across the country, including Kyiv’s airport Boryspil and facilities in the Black Sea port city of Odesa. US defence officials estimated that 100 missiles were fired in the initial assault.

By late morning, dozens of Russian helicopters had begun attacking Hostomel airport in a suburb north of Kyiv.

Ukraine’s ambassador to Japan, Sergiy Korsunsky, described in a press conference in Tokyo on Friday an early encounter at a Black Sea outpost known as Serpent Island, or zmiinyi in Russian, that he said was a “symbol of resistance”.

The envoy played a recording of a radio conversation between Russian naval vessels and the lightly armed Ukrainian border guards stationed on the island. Korsunsky said the Russian vessels had twice demanded the Ukrainians lay down their weapons and surrender or be destroyed.

“The answer was ‘go fuck yourself’,” said Korsunski, adding that the Russians then obliterated the structures on the island, killing the 13 guards stationed there. 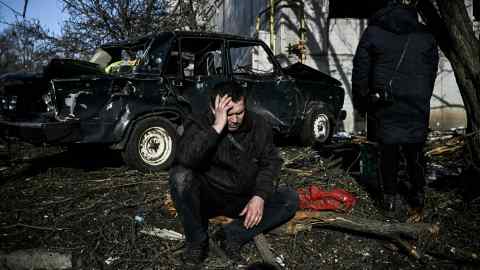 Russia claims, based on little or no evidence, that Ukraine is attacking the separatist-held territories in the Donbas, where more than 14,000 people have died in a conflict that broke out after the annexation of Crimea.

Nato will hold an emergency summit of its members’ 30 leaders on Friday to discuss what the alliance’s head described as Russia’s “deliberate, cold-blooded and long-planned invasion” of Ukraine.