How Zimmermann put Australian fashion on the map

With their bubbly, beach-bound aesthetic, sisters Nicky and Simone Zimmermann have created a fashion empire – and a template for Down Under-design

We’ll send you a myFT Daily Digest email rounding up the latest Style news every morning.

It’s hard to get a word in when Nicky and Simone Zimmermann are together. Over dinner at Sean’s, the famously kitsch restaurant overlooking Bondi Beach, the sisters finish each other’s sentences, share anecdotes from their travels and giggle at in-jokes. Their bubbly dispositions seem to contradict the seriousness of their achievements in business – the reason for our meeting – which include creating one of the, if not the most, successful luxury fashion brands to come out of Australia. The pair make it seem as if such a feat might be easy.

Entering the world they’ve created is like diving into a pool of frothy tulle. Zimmermann’s signature dresses are often tiered, with over-the-top frills, bows and enough ruching to make your head spin. Super-flared trousers and sweet pussy-bow blouses give off a decidedly ’70s air. The swimwear usually has some sort of flounce, and no shortage of prints.

Zimmermann’s immediately recognisable aesthetic, which the sisters have articulated for more than 30 years now, may not be to “classic” fashion tastes, but it does appeal to an undeniably large audience, both locally and internationally. The brand has 52 stores globally, including 21 in Australia and 18 in the United States, and often ranks among the top sellers on Net-a-Porter and MatchesFashion in the UK and US, particularly in the summer months. Zimmermann’s dresses have been worn by Catherine, the Princess of Wales, Beyoncé and Katie Holmes, and according to CEO Chris Olliver (who is married to Nicky), global top-line sales have increased at an average of just over 30 per cent each year over the past five years. In 2020, Milan-based company Style Capital bought a 70 per cent stake in the business, which was worth approximately $363.3mn at the time.

Nicky, the younger of the pair, launched the brand in 1991 after studying fashion design at East Sydney Technical College. She initially worked and sold from her parents’ garage in Sydney to friends and local customers before graduating to a stall at the city’s famed Paddington Markets. “I started out designing shirts with hand-embroidery, which was completely impractical because I was doing it all,” explains Nicky, who says she was crafty from a young age. The brand’s early success was propelled by an editorial in Vogue Australia, in which then fashion director Judith Cook gave one of Zimmermann’s shirts a full page.

Simone, who had been living overseas, joined the brand slightly after launch to oversee the business side of Zimmermann. “We’d always had a plan we would do something together,” says Nicky. They opened their first store in Darlinghurst but kept the Paddington Market stall because it was so successful, running both for two years. “It was a time when everyone went to Paddington, and it was really fun,” says Nicky. “And it’s where a lot of other designers started out – Third Millennium, Dinosaur Designs, Wayne Cooper.”

We decided to do swimwear with clothing, which no one had done at the time. It was a different point of view

In 1996, they helped to launch Australian Fashion Week, together with eight other designers including Collette Dinnigan and Peter Morrissey. It was a turning point. “We had made up our minds that we wanted a business that was going to be international,” says Nicky. Zimmermann was then picked up by London department store Harvey Nichols, which gave the brand a coveted window display, and Net-a-Porter, which launched in 2000, soon followed as a stockist. Further growth came through the Victoria’s Secret catalogue, back when it collated products from other brands. “We hit this one bikini that was screen-printed, and it just went on and on and on,” says Nicky.

“You couldn’t even believe there were that many people in the world,” adds Simone. “It was a real eye-opener.”

In those early days, Zimmermann’s proposition was unique – and one that some international buyers didn’t understand. “We decided to do swimwear with clothing, which no one had done at the time,” says Nicky. “It was very fashion swimwear, and the prints were the same as the clothes. And it wasn’t kaftans. It was jackets and pants and full-on dresses, and it was quite a different point of view.”

“In 1996, Australia wasn’t on the world map in the same way it is now,” adds Simone. “It’s considered to be much more sophisticated today than it was then.”

By that virtue, Zimmermann paved the way for Australian resortwear, which is today populated with countless brands, from Matteau to Sir the Label and St Agni, which have all amassed international customer bases. “We just get resort, we live it, we grew up with that aesthetic, and I think Nicky and Simone have mastered it,” says Yasmin Sewell, the Australia-born, London-based fashion consultant-turned-wellness brand founder. “Having seen them build [the brand] over decades from my time back in Australia, they are growing in confidence in design, taking more risks, being more flamboyant but still so very them.”

Much of the brand’s success has come from selling an idealised version of the Australian woman – a beachy, blonde and bronzed glamazon from Down Under. But over-reiterating this well-trodden aesthetic hasn’t always worked in their favour. In 2020, during the Black Lives Matter protests, social media users criticised the brand’s lack of diversity in its casting as well as for an existing “grooming and presentations standards” guide for retail staff that stipulated that workers’ hair must be in “soft, textured loose waves or blow-dried straight” with “high buns, top knots, plaits, braids” prohibited. “We’ve really learnt, since that time when things were highlighted, to do better and be as open as we can possibly be,” says Simone. “What we took on board from that is that we can do things better in everything we do, with product and design, how we operate as a business around sustainability and [also] around diversity and inclusion. It’s something that we’ve gotten better at, that we want to be better at… so we just work every day in terms of creating environments that meet our humanity goals.”

Other changes of tack include switching from New York Fashion Week, where Zimmermann had shown its collections since 2013, to Paris Fashion Week where it debuted its SS23 range earlier this month. It’s part of a move to grow Zimmermann’s base in Europe, where there are currently 12 stores, with plans to open more. The brand is also expanding further into knitwear, denim and accessories to complement its bestselling dresses. “We can see the path of growth,” adds Nicky. “We talk about accessories, doing more product lines, getting better at what we’re doing, while maintaining what the brand is. But for me, the most important thing is enjoyment.” 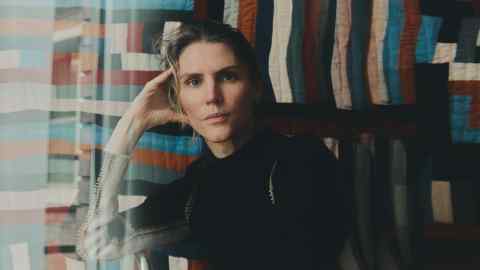 And, of course, embodying the sunny Australian lifestyle, which Nicky says isn’t something she does consciously. “It just happens, in that the things that I gravitate to are things that people assume are Australian,” she says. “It’s in the colours, the prints. Sometimes a dress will make me laugh because I think it just looks fun – I can just see the girl going out and having fun in it.”

Adds Simone: “To an outsider, I think the Australian-ness is kind of intrinsic to your attitude to life and your own personality. The sunniness, the wanting to have fun… I think all of that comes through. It’s a natural symbiosis.”