Are you ready to go full moustache?

Agatha Christie gave her famous detective one. Salvador Dalí once claimed his was “the most serious part” of his personality. Colin Farrell has worn them repeatedly in the likes of Miami Vice, True Detective, The Lobster, and off-screen too. An Anglo-Saxon helmet found at Sutton Hoo featured a very precise bronze model, and the Mona Lisa gained one courtesy of Duchamp. They’re everywhere in Wes Anderson’s films, and Freddie Mercury’s was inexplicably sexy. Moustaches may, on the surface, seem like a simple rash of hair above the lip, but they’re a whole lot more. Comedic, camp, sinister, subversive, masculine, arty and divisive, they’re the facial hair motif with bite. And lately they’ve been experiencing a renaissance.

Timothée Chalamet toyed with one in 2020. Paul Mescal was spotted sporting his own at Cannes last spring (his facial hair experiment had started out as a bit of fun, but a director told him to keep it). Also in the spring, the actor Jessie Buckley went to the Met Gala in a look inspired by Dalí’s Mustache book, with a comic homage drawn on her upper lip. At Venice Film Festival in September it made neat appearances on fashion designer Haider Ackermann and the actor Dhafer L’Abidine, while Rami Malek and Sam Rockwell sport them in this autumn’s period films Amsterdam and See How They Run. They were spotted on Burberry and Bottega Veneta’s SS23 catwalks, and not so long ago I grew my own. It was inspired in part by The Lighthouse – where Robert Pattinson’s absolutely bonkers performance was complemented by a large ’tache sprawling along his lip – and in part by lockdown boredom. Was it my version of the “Zoom earring”? Certainly, for men who don’t want to experiment with make-up, it has a similar effect to a strong lip.

Luke Walker, the designer and founder of fashion label LEJ, says he grew a moustache as soon as he could, although he can’t recall what prompted it. “The warmest reactions I’ve received are when I’ve travelled in India,” he says. “It seems to be an instant ice-breaker. I think it’s safe to say that it’s more common for men in India to wear a moustache, so to be a westerner wearing one seems to be relatively novel. Everywhere men will raise a hand to their upper lip and mime a twisting-of-the-whiskers action, along with a big old grin.”

Lucinda Hawksley, author of the book Moustaches, Whiskers & Beards (NPG), says that moustaches are “Marmite”. “For centuries, society has vacillated between requiring men either to be clean-shaven or to be heavily hirsute. So when men began deciding to shave their beards yet retain a moustache, it was genuinely considered shocking.” She adds: “The moustache sans beard really came into its own in the 18th century with dandies, and again in the late 19th century,” when the Aesthetic movement held sway. They were also “seriously popular just after the first world war, following the trend from Hollywood, and seen as quite louche – many employers banned their workers from having moustaches”. Artists who have tackled moustaches include Modigliani, Glyn Philpot and, very recently, the Pakistani-born artist Salman Toor; but the winner hands-down in painting has to be Paul Cadmus’s Jerry, from 1931. This perfectly groomed top lip, styled with a copy of Ulysses (and not much else), is so convincingly at home on its wearer that all debate about the pros and cons ends. 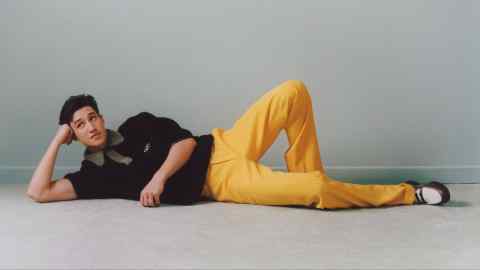 While Hawksley agrees that “Movember” – an annual international initiative launched in 2003 to raise money for men’s health – has been a factor in the moustache’s return to popularity, she also connects this particular revival to the concurrent rise in ironic ’70s fashions. In particular, Alessandro Michele’s Gucci, with its vintage themes and gender fluidity, has played a part (the designer is himself the possessor of a fine face of hair). But then the moustache has always walked a fine line between being very macho and very camp. Ian Massey, author of the recent study Queer St Ives & Other Stories (Ridinghouse), points out that “it’s a requisite accoutrement for certain masculine stereotypes” – which are then ripe for queer appropriation. “Figures of upright military bearing with toothbrush moustaches; dandyish suited and booted types; and the hyper-macho drag of 1970s clones in checked shirts and Levi’s...”

The only people who don’t like my moustache at all are my parents. My dad has pleaded with me to get rid of it, while my mum, on hearing I was writing this, said simply: “Can you mention how ageing I think it is on you?” Luckily, my boyfriend thinks it’s very Charles Ryder in Brideshead Revisited. Given the excellence of Jeremy Irons, I’ll take it.