In 1975, Howardena Pindell, a zealous young Yale graduate from Philadelphia living in New York, decided to add glitter to her abstract paintings. Inspired by the latex works of the sculptor Eva Hesse, Pindell “loved the way glitter created texture on the surface – caught the shifting typography of light”, as the 79-year-old artist says from her studio in New York. Chintzy, cheerful and accessible, glitter evokes disco balls and dancefloors, cabaret costumes and cheap children’s craft. Nearly 50 years on from Pindell’s first efforts, many artists are drawn to its optical potential – but its patina of luxury and prosperity can also serve as a way of asking more difficult questions.

Last summer, an extensive exhibition of Pindell’s works – which also incorporate perfume, talc and sequins – at Kettle’s Yard, Cambridge, showed exactly how dazzling, and avant-garde, her use of glitter has been. But Pindell has always been a pioneer. A member of a co-op of feminists who founded the legendary AIR gallery at 97 Wooster Street in 1972 (now housed in the Dumbo neighbourhood of Brooklyn), she was one of the women who set about shaking up New York City’s male-dominated art scene. In the 1970s, she worked at MoMA, becoming the first black female curator on staff before resigning in 1979 in protest against a discriminatory exhibition. After a car accident damaged her memory, she turned to painting full-time. Introducing glitter “may have been a reaction to the fabricated work and minimalism” popular at the time, she muses. Glitter represented beauty, the touch of the human hand, and it emanated light.

Yet Pindell soon discovered that all that glitters doesn’t turn to gold. Her works were broadly dismissed, with critics unwilling to engage with either the themes she addressed or the medium she used. Her use of glitter was widely misunderstood, with one newspaper critic writing that he would like to have sex under her paintings. By the 1980s Pindell moved away from glitter, only returning to the material in the 2000s. One of the derided glitter works from the late 1970s, a vanilla-hued giant measuring about seven by 8.5 feet, Untitled #24, sold for $1,134,000 at auction at Christie’s in May this year – a record figure for a work by the artist. “Isn’t that crazy?” Pindell laughs.

It represents beauty, the touch of the human hand, and light

Across the Atlantic, two decades after Pindell’s early feminist experimentations, Chris Ofili sprinkled his monumental-scale “hip-hop” version of the Holy Virgin Mary with scintillating clouds of glitter, applied to the canvas alongside elephant dung. The explosively popular and provocative work defined the burgeoning YBA generation and opened up the possibilities of using contradictory, unconventional materials in radical and politicised ways: in Ofili’s iconic work, decorative glimmer provided a thin veil of glamour, contrasting with the messier earthy elements of a real woman’s bare body.

Glitter has its own regional resonances too. Currently showing at Venice Biennale’s The Milk of Dreams exhibition (until 27 November) are the eye-catching textile works of Haitian artist Myrlande Constant, which are derived from the tradition of drapo Vodou (Vodou flags). These intricately detailed, glistening needlework pieces were typically made to adorn temples and for ceremonial practices, with sparkling beads and glittering sequins depicting Iwa spirits and Vodou myths, as well as scenes related to Haitian history. Constant’s luminescent renditions with their evocative surfaces also speak to the deep-rooted human attraction to shiny things with their promise of majesty and divinity – a quasi-cosmic power. A major retrospective dedicated to the artist is due to open at the Fowler Museum at UCLA, Los Angeles, in March 2023.

Another artist who has long dabbled in glitter is the American painter Chris Martin, although his entry point was quite different. “I worked as an art therapist with men and women living with Aids for around 16 years,” he says. “While working at a treatment programme in Red Hook Brooklyn in 1992, I ordered a variety of arts and crafts supplies including glitter. Many of the clients loved glitter and used it to great effect in their art.

“As an artist I was initially dismissive of glitter as a ‘craft’ material and somehow a cheap trick. But it’s wild and beautiful, and I soon came around to the whole new sense of light and movement. I began investigating a range of materials such as pom poms, aluminium foil, pillows, plastic jewels, old clothing, leaves, dried bread and collage of all kinds.” The paintings were, he says, “fresh, funny, and surprising. Who doesn’t love glitter?” Martin – who presented a range of glitter-infused paintings at Timothy Taylor earlier this year – regularly commands up to $200,000 for his works.

For a new generation, glitter – true to its indelible form – isn’t going away either. From Mickalene Thomas’s bedazzling, sought-after paintings of female figures to the ornate, glitzy tapestries of Ebony G Patterson, it has become a go-to for bleeding-edge emerging artists. Among them is Damali Abrams, a Reiki practitioner and self-styled “glitter priestess”; Theresa Chromati, whose sensual paintings also feature protruding soft silk sculptures and leather; and Devan Shimoyama, known for narrative self-portraits and paintings of figures evoking folklore, myths and personal stories that sell for up to $85,000.

“I use glitter for a multitude of reasons,” says Shimoyama. He gravitated towards it “for its reflective quality, the way that it holds a very different presence when viewed in person, commanding attention and dazzling as one observes the surface. I also love that it creates more texture and fantastical elements within a painting. As a craft material, it has a kind of cheapness to it, but there’s an effectively faux-glamorous effect when used in the right way. More is often more.”

In the hands of artists, shimmery surfaces can become subtle subversions, overturning kitsch associations and hierarchies of taste. But the perennial appeal of glitter, it seems, lies in its transcendental quality, its joyfulness. Amani Lewis, a young artist whose first European solo exhibition opened at LGDR in Paris last month, thinks so: “I loved hearing Brice Marden talk about his colour usage, and how we can only arrive at colour through light. With glitter, both things happen simultaneously.”

The Aesthete
Artist Tschabalala Self: ‘I tend to be a bit nosy’ 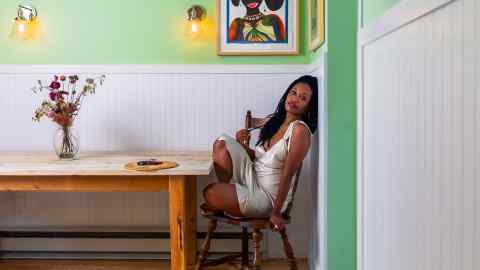 In Lewis’s tableaux, glitchy scenes based on photographs composed with pastel, paint and digital collage, glitter is a way to draw the viewer’s eye to important references or metaphors. But it also adds an essential element, one that much contemporary art misses: fun. “Glitter is very much a child-like material. It makes people happy and feel somewhat free,” says Lewis. “The late Charles White talked about how the responsibility of the artist is to create work that creates liberation. That’s my goal.”