The actress has lent her distinctive voice to a haunting new collaboration with the composer Léonard Lasry. But don’t call her a singer

A lot of things happened on this sofa,” says actor Charlotte Rampling, seated on a minimal low-backed three-seater with Léonard Lasry in his Left Bank apartment. The scene around them is set by a white Yamaha grand piano, Memphis side tables and a giant Pink Panther soft toy. The sofa is where the duo first started discussing the just-released album De l’amour mais quelle drôle d’idée (Love, but what a funny idea): a gorgeous spoken-verse collection that ruminates on love, loss and caprice with a quintessentially French poetic sentiment.

Rampling is best known for her work on screen – such as The Night Porter and the films of François Ozon: her latest project is Denis Villeneuve’s epic sci-fi film Dune: Part Two. But her musical talents run deep. “I’ve always loved music and, as a child of the 1960s, it was so extraordinary when growing up. I was totally into it as everyone was – listening to The Beatles and The Rolling Stones and everything that came thundering through the ’60s.” Rampling, who is bilingual and has lived in Paris since the 1970s, was also part of an epic cultural union. “I married Jean-Michel Jarre,” she says of her ex, the electronic music icon. “I know I have incredible rhythm and dance well, but I could not compose and I play instruments badly.”

Her first foray into recording was at the invitation of famed songwriter and composer Michel Rivgauche, who wrote for Édith Piaf, Nana Mouskouri and Maurice Chevalier among many others. Comme une Femme was released in 2002. Her recent stage performances have revolved around the spoken word and included reading Shakespearian sonnets accompanied by a cellist. But she has declined the offer of performing on stage. “I’m not a singer and I am not going on show – I’m very respectful of what people really do.”

When people listen, they will recognise her acting

For Lasry, Rampling offers up a narrative voice that is lush, smoky, seductive and haunting. Meanwhile, Lasry’s compositions lure the listener with tantalising rhythms and an ingenious synthesis of musical styles infused with ’70s pop, memories of cinematic scores and echoes of Scott Walker. “It is not soppy or sentimental, as a character I prefer not to go there. Yet romantic can be colossal!” says Rampling. “Léonard needed a voice that gives lived-in interest, and I didn’t want to be too ‘clear’ as that is not who I am. Bright-eyed and bushy-tailed? Well, maybe bright-eyed,” she laughs, winking a magnificent almond-shaped blue eye.

Lasry, 40, became smitten with Rampling’s voice and presence as a teenager watching films from her oeuvre. “I have always loved the precision of her choices in the films she has made; the way she acts and gets into a role and is always at one with a character,” says Lasry, who was inspired into composition via his obsession with cinema. A prodigiously talented pianist, he began composing aged 10, launched his own label, 29 Music, in 2006 and released his first album, Des illusions, that same year. He has written music for films such as 4 Days in France (2016) and worked on numerous “sonic projects” with fashion houses including Valentino and Dior.

The Lasry and Rampling relationship was not exactly a coup de foudre; it gestated over time. The composer first encountered Rampling at a reading she gave at the Grenier des Grands Augustins (a 17th-century building that housed Picasso’s studio between 1936 and 1955) as part of an event to raise funds for the preservation of the building in 2012. “I had a few ideas for some songs for her, but I am not one to ring the doorbell. But life is life, and last year we met again and recorded a song,” says Lasry. They recorded the ballad “Via Condotti”, a duet featuring Rampling speaking in verse about a love affair set on the streets of Rome with Lasry singing the chorus. “It matched so well – all my beginnings were in Italy, where I was awoken to cinema and where, aged 20, [the Italian director] Gianfranco Mingozzi requested me for the film Sardinia Kidnapped (Sequestro di Persona, 1968),” says Rampling. “For me, ‘Via Condotti’ was nostalgia, with this great swing rhythm.”

The Lasry-Rampling collaboration proved the perfect primer for the album project. And, unlike an actress who sings songs, this is Rampling working in the medium of spoken verse specifically written and composed for her. “When people start to listen they will recognise her acting,” explains Lasry of the score, which segues from the soothing and melodic to the frenzied cantering beat of “Ne fais pas attention à mon amour” and melancholia all offset by that unmistakable delivery.

The lyrics are the work of Lasry’s long-time lyricist, Élisa Point. “All my records are written by her and we work together on 80 per cent of my projects,” says Lasry. “She has a way of expressing love and feelings that matches Charlotte so well.

“Point’s lyrics are poetic but not so serious. She writes in a way that is a little amused by life and love – there’s a touch of irony and self-deprecation that the English love,” he explains. 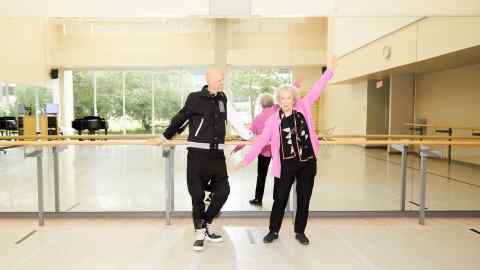 With a burst of creativity, Point and Lasry composed nearly all 10 songs in one long overnight odyssey, and he presented those works to Rampling in January 2022. There was an instinctive rapport. “It is eclectic and each track is a story, a tiny film. I have never known anything so quick!” smiles Rampling. “Maybe it took just over three months, and every few weeks Léonard would call me to schedule studio time. He has an organised energy, which is so useful to creative people as it ‘holds’ you. I know that I float off a lot as my work takes me away into other universes. Léonard is like a parent, a gentle parent, and it was made with such joy, I did not even question it,” she adds.

Rampling is not contemplating touring De l’amour mais quelle drôle d’idée but the duo are musing on the possibility of a theatrical something at some point. Each has their favourite lyrics. For Rampling it is “Magnifique, n’est-ce pas? Un amour comme ça? Sublime, n’est ce pas?” “It is about knowing a lover is going to leave you, the sense of someone slowly slipping through the fingers, and it is heartbreaking,” says Rampling. They both agree that the lyrics should never be translated as the nuance is lost in English. For Lasry it is “Non, je ne vois pas qui vous êtes” (No, I don’t see who you are), on the first track to be released. “It’s a funny song founded on the apprehension, the cliché of meeting Charlotte Rampling and believing she would be as cold and dismissive as her characters,” he smiles.

Meanwhile, this album makes for lovely listening and lucid dreaming as the winter draws in. “The unconscious mind is so much more creative than the conscious when you allow it to come through – and when people are as prolific as Léonard, I’m sure that is how it works,” contemplates Rampling. “Things are born by themselves. I do not ‘search’, and if it is not happening I do not do it!” says Lasry. The enchanting melodies speak for themselves.