Renminbi falls to lowest level since 2008 as dollar strengthens

Hudson Lockett in Hong Kong and Thomas Hale in Shanghai

We’ll send you a myFT Daily Digest email rounding up the latest Renminbi news every morning.

China’s renminbi fell to the lowest level since 2008 as the country’s central bank holds back from intervening to prop up the currency in response to the rallying dollar.

The renminbi is the latest major currency to succumb to a wave of dollar strength that has sent exchange rates from the pound to the yen spiralling lower this year.

As the People’s Bank of China pursues monetary easing to shore up economic growth, continued policy divergence with the hawkish US Federal Reserve is expected to push the Chinese currency down further.

The PBoC has so far stopped short of deploying significant foreign exchange reserves, instead relying on indirect measures to discourage bets on continued falls and slow the pace of depreciation.

The onshore exchange rate for the currency fell 0.7 per cent to Rmb7.2268 on Wednesday, bringing it 13.8 per cent lower for the year to date.

“Over the last 24 hours, the focus has switched from the pound to the Chinese renminbi,” said Frantisek Taborsky, a foreign exchange strategist at ING.

In Hong Kong, the offshore rate fell as much as 0.9 per cent to Rmb7.2416 against the dollar, the lowest on record since the city’s clearing banks were first allowed to freely open renminbi accounts in 2010, creating the so-called “offshore” trade in the tightly controlled currency.

The offshore renminbi, introduced to facilitate greater international use of China’s currency, is not subject to the onshore rate’s dollar trading band, which limits moves to 2 per cent in either direction from a midpoint set each morning by the central bank.

But following a serious sell-off in 2015 spurred by a one-off devaluation, Chinese authorities throttled liquidity in Hong Kong. Since then, the offshore renminbi has closely followed the onshore rate, which analysts at Morgan Stanley forecast will end the year down almost 15 per cent at Rmb7.3 against the dollar.

“I don’t think the current depreciation is driven by specific domestic [issues] in China,” said Ken Cheung, chief Asian FX strategist at Mizuho. “It’s basically driven by the strength of the US dollar.”

Cheung pointed to the renminbi’s “steady” level against a broader basket of currencies suggesting that so far, the move was not creating serious problems in terms of capital outflows.

On Monday, the central bank introduced new measures effectively making it more expensive to short the currency by requiring banks to post reserves when selling derivatives contracts. The PBoC has previously introduced similar requirements during bouts of currency weakness.

Martin Wolf
Why the strength of the dollar matters 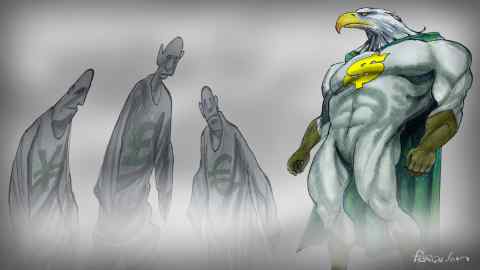 But the reversal of Chinese government debt’s interest rate advantage means that a longstanding driver of inflows to the country’s bond market has now vanished. At the start of this year, 10-year Chinese government bonds offered a 1.1 percentage point yield advantage over the equivalent US Treasuries, but returns on the latter now outstrip those of the former by 1.3 per cent.

“Since the PBoC can do little to change the fundamental forces driving the dollar’s gains, attempts to reverse market trends would likely fail, undermining its credibility,” said Wei He, an analyst at Gavekal Dragonomics.

“The better course is probably to allow the current trend to play out, while limiting volatility and waiting for the inevitable reversal of direction.”