US opens new cobalt mine as EV battery needs grow

Claire Bushey in New York and Aime Williams in Washington

We’ll send you a myFT Daily Digest email rounding up the latest Mining news every morning.

The first new US cobalt mine to open in decades is ramping up production in Idaho, buoyed by the carmakers’ increasing demand for battery raw materials and legislation designed to foster a battery supply chain.

The mine is located in the state’s Salmon River Mountains at 8,000ft above sea level. Owned by Australia’s Jervois Global, chief executive Bryce Crocker said it will reach full production in February, extracting 2,000 tonnes of the bluish ore a year. A ribbon-cutting ceremony was scheduled for Friday.

A critical component of the lithium-ion batteries that power electric cars and trucks, demand for cobalt from carmakers is threatening to outstrip supply as the automotive industry electrifies. The price of cobalt doubled last year to $32 a pound before falling to its current price at $27.75. The Inflation Reduction Act climate and tax law passed in August includes provisions geared toward developing a US supply chain for batteries, potentially benefiting domestic suppliers of key minerals such as cobalt.

“The United States needs to secure access to critical minerals,” Crocker said. “There’s not enough materials to go around.”

About 160,000 tonnes of cobalt were mined worldwide in 2021, with about a third going to the automotive industry, according to the Cobalt Institute, a trade association based in the UK. The US produced some cobalt, with Michigan’s Eagle Mine unearthing the mineral as a byproduct of its nickel operations.

But the US contributed only less than 1 per cent of global supply, according to the US Geological Survey. About 70 per cent of the supply comes from the Democratic Republic of Congo, where workers labour under notoriously poor conditions.

China is the world’s leading producer of refined cobalt. The country “identified the battery supply chain as a nationally important industry for a long, long time now, not just the last couple of years like a lot of western governments”, said Caspar Rawles, chief data officer at Benchmark Mineral Intelligence.

The high concentration of cobalt mining and processing across the DRC and China is “a concern”, he said, because a disruption in cobalt exports in either country means losing nearly three-quarters of the global supply.

Jervois has invested $200mn to develop the Idaho mine. It originally projected it would make back the investment in three years, though that estimate has stretched out with rising inflation.

The Idaho mine is small compared to competitors: “You’re looking at something like 10 of the Jervois mines to get to the size of the bigger DRC mines,” Rawles said.

However, its location in the US gives it an advantage. EV shoppers can receive a tax credit worth up to $7,500 off their vehicle, but only if at least 40 per cent of the minerals in the battery were mined or recycled in the US, or a country that has a free trade agreement with the US, according to the provisions of the climate law.

Cobalt that comes from the Idaho mine will become more valuable to carmakers because it will help make their vehicles eligible for the tax credit. At the same time, Jervois also has a facility in Finland, which lacks a free trade agreement with the US. Manufacturers will pay more or less for the mineral depending on whether it can help them earn the tax credit for their buyers.

“The Inflation Reduction Act is going to change trade flows and capital flows in a way that isn’t truly understood,” Crocker said. “It’s a profound piece of legislation.” 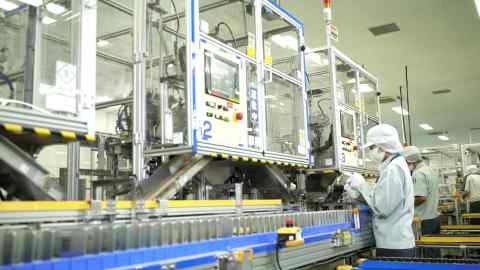 The proposed Jervois mine lies adjacent to the defunct Blackbird mine, which extracted cobalt, silver and copper ore from underground and open pit mining operations and closed in 1968.

According to the US Environmental Protection Agency, cobalt, copper and arsenic were released into neighbouring watersheds. One nearby creek was “basically a dead river” before recent restoration efforts, said Josh Johnson, senior conservation associate at the Idaho Conservation League.

Blackbird mine was “an environmental disaster”, Crocker said, but today water treatment facilities can prevent such contamination.

“Our job is to make sure that 30 to 40 years from today, however long the mine lasts, when you go back there you can’t tell there’s ever been a mine,” he said.