Something odd happened during the interregnum of the pandemic. The office came home. And then it wouldn’t leave. Those of us whose work could be done by laptop found unexpected spaces in our homes being reimagined as offices: landings, spare bedrooms, kitchen tables, dressing tables, beds, under-the-stairs Zoom rooms.

The boundary that might once have delineated home and work dissolved. And the strange thing about this is that it represents the exact opposite of what had been happening over the past couple of decades as the office attempted to convince us to hang around for longer, to chill, but to keep working, to treat it as a second home (one supercool co-working ­outfit adopted precisely that name).

This journey has taken us from the days of corporate uniformity, when the mid-century office was understood as a paragon of efficiency above all else, to the German notion of the Bürolandschaft (office landscape) as a more informal organising principle that started to prioritise autonomy and fluidity in the office.

It then passed through the hip advertising offices of the late 20th century, with their self-consciously quirky pop-culture references and loft style, to what we have today: an eclectic blend of techhub, play area and art installation, with only the vaguest hint of work.

The office has followed a trajectory of aesthetic entropy, from rigour to relaxation, in which wellbeing is prioritised over organisation and control. It is, of course, an illusion: control has simply shifted online, with our devices tracking our engagement with work far more rigorously than any office plan could ever facilitate. Nevertheless, the physical office environment has been slouching towards a kind of domesticity for decades.

In its early days, the office was a house. Those 18th-century, flat-fronted buildings of London, Amsterdam and New York might be chambers or offices. Business owners might live there too; their offices were just other rooms in the house. For most of the first half of the 20th century, the boss’s office and the boardroom aimed to emulate the house, with the domestic comfort of fireplaces, plumply upholstered chairs, oil paintings, and mahogany writing desks. The suggestion was that this important man was at home in business; that, in this rarefied realm, work and home were not differentiated, and the visitor was transposed to a private, privileged realm where the usual accoutrements of the everyday office did not apply. Its panelled walls contained a memory of the intimacy and comfort of domesticity.

Even into the modernist mid-20th century, the executive suite maintained these trappings of home: the big desk, the family photos, the drinks cabinet, the private bathroom. In From Bauhaus to Our House (1981), Tom Wolfe joked about “every great law firm in New York mov[ing] without a sputter of protest into a glass-box office building . . . and then hir[ing] a decorator . . . to turn these mean cubes and grids into a horizontal fantasy of a Restoration townhouse”.

Some of this elitism survives in clubby corner offices, but the advance of the big-tech aesthetic has had a profound impact on the look of the office. Ironically, that pseudo-industrial loft look is itself drawn from a kind of urban domestic idyll. The artists who repopulated the empty lofts of downtown New York in the 1960s and 1970s reinvented the idea of the live-work space, melding labour and domesticity. It was that look, the creative ideal, that seeped out into the workplace, oozing through the big open offices of Silicon Valley.

This raw industrial environment replete with ducting, plywood and mix’n’match vintage furniture was intended to inculcate an impression of agency. Studies have shown that what workers want is a degree of control over their environment, to be able to adjust lighting, heating, perhaps even open a window. But most of these things remain impossible in the modern sealed office building. So, instead, they are given the illusion — with the facility to swap furniture around, to customise their workspace with photos and gewgaws, or move around to booths or breakout spaces and pseudo cafés — that they can in­flu­ence their space. It remains a scam.

Despite all the rhetoric about wellbeing, collaboration and sociability, research has revealed that open-plan offices, with their attendant background noise, enforced amiability and conversation, and the sharing of space all negatively affected employee health. A comprehensive Danish report from 2011 showed that workers in open-plan offices took more sick days than those sharing small offices. Healthiest of all, perhaps not surprisingly, were those working in rooms of their own.

The more recent development, which spurs from a combination of tech aesthetics and co-working space, is a placelessness intended to echo the coffee shop, the workshop, or the spaces of cultural production. Stability and a sense of place have been undermined by hot-desking. The intent is to inculcate a sense of mobility and agility, of not being tied down. Yet, in essence, it is another ruse to save space, and one that is accelerating as offices thin out, with people continuing to work from home for much of the week. The look is deliberately domestic. Eclectic velvet upholstered sofas, rugs, modernist statement lamps, vintage sideboards, macramé, tropical plants, bookshelves, all concocted to evoke the feel of the kind of social, cool urban home you might aspire to (rather than the poky, suburban half-house or flat-share you probably have).

The twin domains of living and working have collapsed into one, so that a burger bar, a co-working space, an airport restaurant, a gallery and a hotel lobby have melded into a single continuous architectural platform. If the intention was to impart to the deracinated office worker an illusion of customisation and control, what happens when the space merges into such an interior?

The look is concocted to evoke the feel of the kind of social, cool urban home you might aspire to

The notion that homeliness is healthy, that an evocation of comfort in the corporate interior would entice us into spending more time at work, has become an insidious merging of labour and leisure. Free breakfasts and snacks, emotional support dogs, events, vintage chairs, graphics on the walls — it all appears as an effort to bring home into the office while our actual suboptimal home offices become less and less enticing.

But, if you have no permanent place in it, no assured presence, no sense of personal space and you cannot open a window to let a little fresh air in, this is not your home. What we really want, it turns out, is a nice private room with a window, a view and some stuff. And our colleagues nearby. But outside. 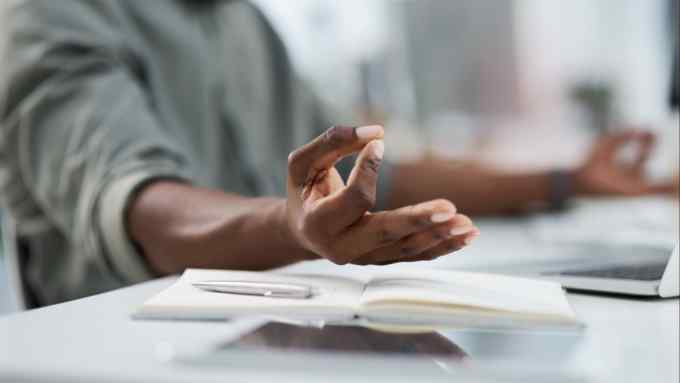