In pictures: a snapshot of Lithuanian photography

We’ll send you a myFT Daily Digest email rounding up the latest Photography news every morning.

Growing up in Vilnius in the 1990s, Kotryna Ula Kiliulyte thought it was perfectly natural to be taught about the humanist tradition of Lithuanian photographers while still at high school. “They were kind of like household names in Lithuania,” says Kiliulyte of Antanas Sutkus, Vitas Luckus and Romualdus Rakauskas — all masters of black and white social documentary.

Only after moving to Scotland in 2006 to study at the Glasgow School of Art did she become fully aware of Lithuania’s outsize contribution to art photography. Witnessing the Lithuanian Season of Photography organised by Glasgow’s Street Level Photoworks gallery in 2014, Kiliulyte was struck by the international reputation her countrymen and women enjoyed.

“At first, I thought this was quite random,” she says. “After researching, I realised Lithuania’s tradition of photography is historically quite unique.”

This distinctive history can be traced to the establishment of the Lithuanian Society of Art Photography in 1969 — a unionised photography group that was the first and only one of its kind permitted in the former USSR. One of its founders was Sutkus, whose resolutely unheroic portraits of children put him at odds with officials who wanted more upbeat depictions of life in the USSR. Sutkus, however, preferred to create what he once called a “psychological portrait of contemporary man”.

Beginning in 1973, photographers would gather in the resort town of Nida on the Curonian Spit — a huge bar of sand dunes stretching along the Baltic — to exhibit and critique one another’s work, far from the watchful eye of the state. Vilnius Photography Gallery opened in the same year.

Following independence in 1990, the Society of Art Photography continued as the Lithuanian Photographers’ Association, led today by Gintaras Česonis. He sees Lithuanian photography’s tradition of mutual support as integral to its global stature, giving it an influence disproportionate to the country’s tiny population.

“Being in a group, in collaboration, artists can do way more than functioning alone,” says Česonis, who is also curator of the Kaunas Photography Gallery, another product of the 1970s photography scene. “Lithuanian photography became so visible because artists could compete on one hand but collaborate on the other hand. They could be together when it was needed to fight for rights and opportunities.”

A key moment was an exhibition entitled 9 Lithuanian Photographers, held in Moscow in 1969. The show had a strongly humanist aesthetic, with series of images depicting everyday life in Lithuania as a distinct ethnographic identity.

“They were really impressed by this idea that you could photograph reality but still you could trace it to the level of art by showing the emotions of people, by showing ideas,” says Agnė Narušytė, art historian and theorist at Vilnius Academy of Arts.

Although no single style now dominates, Lithuanian photography continues to thrive. The Nida Photography Symposium is now pushing 50, while worldwide interest remains strong. The German publisher Steidl, for example, has published four volumes of Sutkus’s work, and an exhibition of Lithuanian photography was recently held in Beijing.

Below are profiles of six contemporary photographers born or working in Lithuania.

Tadas Kazakevičius is a Lithuanian artist living in Vilnius who documents the disappearing traditions of life in the country. His practice is inspired by the documentary photography of Walker Evans, Dorothea Lange and Jack Delano, whose work for the US Farm Security Administration captured life in rural America during the Great Depression.

In his series Soon to be Gone, the photographer continues the humanist tradition of the Lithuanian Photography School by documenting rural life, with a focus on areas where mass emigration since EU accession has caused the populations of once close-knit communities to shrink.

“I started to go into these villages and look at the people,” Kazakevičius says. “I was always amazed by the work of the Lithuanian Photography School. I wasn’t a big ‘village person’ but in some sense my longing for a previous time of photography was key to this.”

“Many people looked for a better life. Many of our villages emptied, the older generations died out, younger generations left…I think in a sense, every photographer looks for what is disappearing. Photography is a fixation with the passing.”

Kotryna Ula Kiliulyte is a Lithuanian artist who lives and works in Glasgow. Her practice employs photography, sound and the moving image to explore nostalgia, migration and climate change. She has exhibited internationally and is currently a visiting lecturer at the Glasgow School of Art.

Amber Room is a series of photographs made in the artist’s native Lithuania and adopted Scotland which contrast memories of home and migration, the personal and political, and east and west. “It started as a visual exercise in longing and loss and has evolved to concentrate on reflective nostalgia,” Kiliulyte says.

“This is about a particular time in a particular place in Europe [that] I was thinking about in the context of my own experience of being a migrant, moving from Lithuania to Scotland – all these concepts had become more important to me over time, personally but also in more abstract terms.”

“At some point, for me, the realisation came: there’s no Lithuania as it was. . . I go back and it’s not only my friends who have changed but also the country itself, the cities. I come back to Vilnius and there’s parts of it I don’t recognise. ‘You can never go home again.’”

Valentyn Odnoviun is a Ukrainian-born photographer living in Vilnius, where he is completing a PhD on the intersections among Ukrainian, Lithuanian, Latvian, Polish and Czechoslovak art photographers in the second half of the 20th century. His practice centres on photography as a medium in which abstraction and reason collide.

In Surveillance, Odnoviun creates quasi-abstract images based on the spy holes found in former KGB prisons in the Baltic states, Germany, Poland and Ukraine. While on first viewing the photographs appear to show planets in space, a second reading reveals the traumatic histories beyond the glass.

“The abstracted image can perhaps convey more objective information than the documentary,” Odnoviun says. “Photography is not reality, it’s kind of another self-sufficient reality to some extent. The abstract can look like the concrete. At the same time, photography is subjective and open to interpretation rather than representation.”

In his project The Process, Odnoviun re-photographs discarded photo paper, originally intended for portraits of political prisoners, which he collected in a former KGB prison darkroom in Tallinn, Estonia. “They stand as a metaphorical memorial for those who we will never see, those who were imprisoned and who are being imprisoned right now in Ukraine.” the artist says.

Geistė Kinčinaitytė is a Lithuanian photographer who describes herself as an alien anthropologist. Her practice uses photography, moving images and sound to explore the relationship between the body and the landscape, the weird and the eerie. She is currently completing a PhD in film and screen studies at the University of Cambridge.

In Smooth Space, Pleated, Kinčinaitytė mixes dreamlike landscapes with nudes, suggesting the transfiguration of water into body and body into landscape through photography, sound and moving images. The work features the video essay, The Pool, the result of a collaboration with writer Elaine Tam and experimental composers Simon Allen, Jan Hendrickse and Sandro Mussida.

Describing Smooth Space, Pleated as a “sensuous love letter, one shared between human and non-human forces”, the artist plays with perspectives both visual and theoretical to present a feeling of the uncanny.

“My interest in the body and corporeality started quite naturally when I first picked up a camera as a teenager,” Kinčinaitytė says. “The figure, the body, the landscape were always in my practice. There is a limit to knowledge and experience. Something which is ungraspable or unknown is experienced as eerie.”

Dovilė Dagienė is a Lithuanian artist and photographer working in Vilnius whose practice explores themes of memory, imagination, time and place. Her series “Boy with a Stick” was awarded the second prize at the 2015 World Photography Awards.

“Before the second world war, almost every village in Lithuania had a photography studio. All my grandparents’ albums were filled with high-quality photographs,” the artist says.

“In childhood, I was very much involved in family photography albums. I was thinking about the strangers in these albums: what has happened in those lives?” 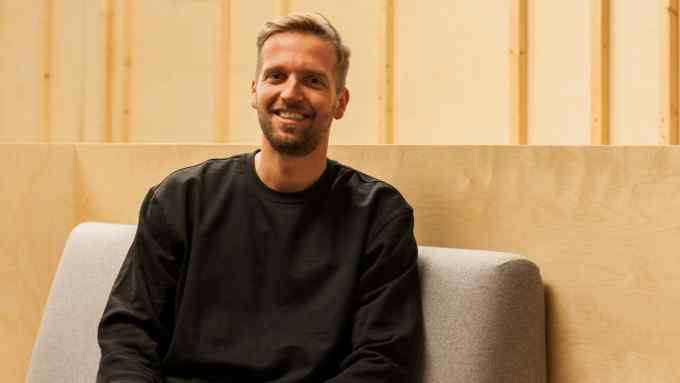