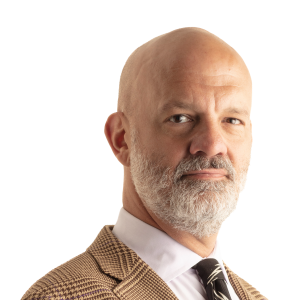 Good morning. The big hedge fund Elliott Management thinks we are on the road to hyperinflation, much deeper market declines, and possibly global strife. The Federal Reserve seems a bit less worried. Let us know which you think is right: robert.armstrong@ft.com and ethan.wu@ft.com.

The stock and bond markets, which do not always behave particularly coherently in response to Fed press conferences, were cogent in response to yesterday’s. Here is a chart of the S&P 500 against the two-year Treasury yield:

At 2pm, the press release landed. As everyone expected, the rate increase was three-quarters of a percentage point, the same as last time. The wording, too, was almost identical to the release from six weeks before, except for this key sentence:

In determining the pace of future increases in the target range, the committee will take into account the cumulative tightening of monetary policy, the lags with which monetary policy affects economic activity and inflation, and economic and financial developments.

This is more or less a jumble of things Fed officials have said before, but the fact that it was inserted into the statement at this particular moment gives it meaning. The crucial words: “lags” and “cumulative”. Both suggest that what the Fed has done already is strong medicine for the treatment of inflation, implying that future doses might not need to be as large. As you can see above, markets signalled their immediate, if measured, approval. Stocks rose and yields fell.

Powell did give the market what it has hoped for and speculated about for weeks — a signal that the pace of rate increases would soon slow:

I have said at the last two press conferences that at some point it will become appropriate to slow the pace of increases. So that time is coming, and it may come as soon as the next meeting or the one after that. No decision has been made. It is likely that we will have a discussion about this at the next meeting.

Now, if the context were benign, those words might have been equivalent to Powell, with a flourish, releasing a flock of white doves from behind the podium. But the context was not benign. The words were prefaced by the Fed chair saying that, as the tightening cycle ages, the pace of increases is less important than the ultimate level of rates, and how long that level is maintained. He said his estimate of the peak rate had risen since the last meeting; noted that the Fed was much more worried about under- than over-tightening, because the latter mistake is easier to repair; and said it was premature to even discuss a pause in rate increases.

See the chart above past 2:20pm for the market response to that.

It may appear odd for Powell to say that while he is increasing his estimate of where rates need to go, he wants to get there more slowly. But there is a logic here. As rates move higher, the possibility of a financial accident increases. A crisis in the financial system (Treasury market breakdown? Big fund blow-up?) could force the Fed to loosen policy even while inflation is still running hot. A more measured pace of increases, even on the way to a higher peak rate, gives everyone some time to adjust, decreasing the chance that something breaks.

The day’s drama was relatively small in scale, though. Both stocks’ and Treasury yields’ end-of-day levels are within recent ranges. A treat was briefly dangled before the markets, then snatched away. Taking a step back, how much has really changed?

We wrote Tuesday that there is a real risk markets are underestimating how long peak rates will be sustained. Markets expect the fed funds rate to touch 5 per cent in the first half of 2023 and then begin falling immediately. We think that is too optimistic, and yesterday’s emphasis on “cumulative” effects and the asymmetric risk of not doing enough made us feel more confident in this view. Whatever the terminal rate ends up being, Powell will hold there until he is sure inflation will stay down. The rates peak may end up looking more like a rates mesa.

On the other hand, a more gradual ascent for rates might also mean lower market volatility. Inflation that is still high, but grinding lower, and rates that are still rising, but more slowly, could calm the market palpitations that now follow rates-relevant data releases, notes BlackRock’s Rick Rieder. And as Sonia Meskin of BNY Mellon Investment Management told Unhedged, tightening delivered in smaller doses should be easier for markets to swallow:

Markets tend to respond more to changes in near-term event probabilities (size of next rate hike) than probabilities of events farther out (ultimate level of terminal rate).

Lower rate-driven volatility, all else equal, would be good for risk assets. But restrictive monetary policy — however gradually delivered — slows the economy, squeezes margins, and increases bankruptcies and defaults. Avoiding a financial accident is not the same as avoiding recession. (Armstrong & Wu)

How much would you pay for Joan Didion’s sunglasses, which her estate is now auctioning off? The $400 to $800 suggested bid strikes us as low.