Perfect places for a total reset, from East Cork to Ballymena

The one-time seat of the Guinness family, 800-year-old Ashford Castle straddles the border of Counties Galway and Mayo, projecting its aura of grand gloriousness over 350 impeccably tended acres and the waters of Lough. From fresh flowers in every room to complimentary use of wellies for every guest – plus spa, fine dining, tennis, riding, and the best falconry school in the country – Ashford is Irish luxury hostelry par excellence.

Its Hideaway Cottage brings all the same service and coddling joys to a more private setting. The estate’s former boathouse, right at the lake’s edge (and a healthy remove from the castle), has been redesigned as a plush one-bedroom grand suite, with Murano glass, Louis Icart drawings on the walls, a huge marble bathtub, hand-laid parquet floors and Brunschwig & Fils tapestry on the late-Georgian chairs. Couples who stay benefit from all the same services as those at the castle and avail of all the same amenities, along with a fully stocked larder and bar, and their own private terrace, in the form of the boathouse’s pier. ashfordcastle.com, from €525; Hideaway Cottage, from €2,750 a night

Water (and wellness) everywhere at Galgorm

Galgorm’s 380 acres of riverside parkland, roughly a 30-minute drive from Belfast and not far from Ballymena, are a known quantity for British spa enthusiasts. As a resort it’s got a bit of everything, from traditional suites in the patrician 1857 main house to cosy shepherd’s huts, to its 29 newer one-, two- and three-bedroom cottages, to a clutch of sweet log cabins.

The spa is a full-service one, with an on-site skin clinic which offers, among other things, light therapies, vitamin injections and infusions. But Galgorm’s usp is its extensive thermal wellness – indoor and outdoor hot and cold soaking tubs, three swimming pools, a salt cave and snow room, steam rooms and saunas. The shepherd’s huts have their own outdoor copper baths, while some of the mixed-use plunge pools line the rock breaks on the banks of the Maine. There’s a spa-dedicated café and, apparently, some treehouses in the offing across the property. galgorm.com, from £175

A County Down redux

Slieve Donard has been a landmark on the County Down coastline, and of Northern Ireland’s favourite hotels, since the turn of the last century. Its Victorian proportions – grand sitting and drawing rooms, towering windows, soaring ceilings – are its calling card, along with the majestic between-Mourne Mountains-and-sea situation (and handy proximity to the Royal County Down Golf Club).

Anyone who felt the interiors had gotten a tad tired will be glad to hear that its new American owners, Marine & Lawn, have invested £16mn in a six-month refurbishment of its 180 rooms, three restaurants and bar. The renovations begin in January, and will see the hotel emerge in summer 2023 looking as sleek as Rusacks at St Andrews and the Marine Troon, two venerable Scottish golf destination resorts owned by the same concern. marineandlawn.com, from £219

Relais & Châteaux has recently launched a new route for those keen to make an Irish pilgrimage with farm-to-fork dining, plush beds and all the other attendant comforts the portfolio of hotels, restaurants and resorts is known for. The Route du Bonheur takes in three properties – the 614-acre Ballyfin Demesne, in County Laois; Cashel Palace, which opened earlier this year in County Tipperary with 42 large and lovely bedrooms; and the Park Hotel Kenmare in County Kerry, which dominates many an international kudos list.

All three boast first-class spas and wellness treatments, offering everything from seaweed baths and vitality pools to Bamford facials. The Route layers in morning meditations, horse riding (for equestrians) or carriage excursions (for the spectators), and outdoor yoga (in Cashel Palace’s case, overlooking the spectacular Rock of Cashel), along with lots of indoor spa and relax time built into each stay. relaischateaux.com, from €2,575 based on two sharing

In Cork, a taste of Basque Country

And for postcard-perfect country-house indulgence, there’s Castlemartyr Estate, the 18th-century manor with its own 220-acre parklands in East Cork. The 108 rooms and 36 contemporary self-catering residences share the estate with both the ruins of an 800-year-old castle and the impressive, angular glass-and timber profile of the shiny new health club and spa (to which residents have access).

That contemporary lean carries into Terre, the estate’s destination restaurant, which opened in September. Chef Vincent Crepel worked at Arzak in San Sebastián and was sous-chef at Restaurant Andre in Singapore (the foodies reading this will understand the impressiveness of those mandates). His high-tech, gorgeous kitchen at Terre merits a spread in a glossy interiors magazine; it definitely deserves a sneak peek if you’re there – or you can book the chef’s table and enjoy the marriage of favours from Basque Country, Asia and Ireland from there (though the patrician dining room, with its furniture all hand-crafted locally, is equally lovely). castlemartyrresort.ie, from £269 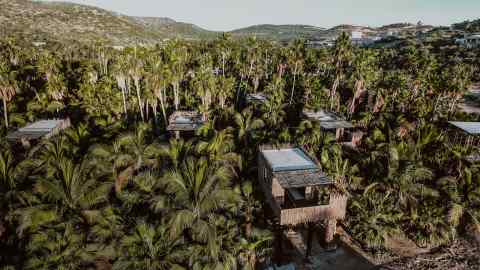