Where to wind down by the waves, from Todos Santos to the Yucatán

When I was a twenty-something growing up in Los Angeles, Tamarindo on Mexico’s Costalegre was known to travel-minded gringos for the beauty of its coastline, pristine littoral rainforests, and the quality of the golf, specifically the David Fleming-designed links course El Tamarindo. As of this month, things look a great deal different here. The Four Seasons has taken over the Tamarindo Reserve’s 3,000 acres and opened a stunning new-build resort, Four Seasons Resort Tamarindo.

Two prominent Mexican architects, Víctor Legorreta and Mauricio Rocha, have partnered to create its 157 accommodations (many of which have their own pools) in elegant contemporary rows cantilevering out from a jungle-clad cliff above the Pacific. Three larger public pools and spa, as well as that famous golf course and some very fine dining, round out the picture; but it’s the three discrete, nearly deserted white sand beaches that may end up being the real draw. fourseasons.com, from $1,550

The wilder side of Baja California

Todos Santos’s popularity has been steadily growing for 20 years. On the Pacific coast of Baja California Sur, its beaches are long and sandy, and the town itself relatively chill, albeit rich in yoga-meditation studios, artisan emporia and boho-surf crews in from LA and New York.

Just south of here is Paradero Todos Santos, co-founded last year by Joshua Kremer, a young Mexican who left an urban investment management career to chase a Baja dream. He calls it Mexico’s first experience-led hospitality brand, and plans to open a few more hotels like it across the country. In the meantime, Paradero’s 35 suites, 100,000sq ft endemic botanical garden, and hecho en Mexico architecture and interiors (down to the blankets and the ceramics, both from Oaxaca) ably represent the ethos.

The chef is ex-Pujol, Mexico City’s forever destination restaurant; the nearby beaches are wild and sequester excellent breaks; and the skies sag with stars most nights. Coming to market soon will be the new Paradero Residences: 26 three-storey villas, designed by Frida Escobedo (who was recently tapped for the Metropolitan Museum of Art’s new $500m contemporary wing), on a gorgeous plot amid the dozen-odd farms of La Mesa. paraderohotels.com, from $550

White nights – and days, and sands – on Punta de Mita

The Riviera Nayarit is equal parts nature-facing, boho-leaning hostelry and straight-up five-star luxury. Auberge Resorts has always been a company that projects a modest degree of the former, while very much flying the latter’s flag.

At its newest, Susurros del Corazón, which opens this month here in Punta de Mita, it looks to be more of the same: elegant rooms with lots of outdoor space, delicious food and drink, from ceviche shacks to high-end dining with attendant wine lists (think the likes of Phelps Insignia, Masseto, and Lynch-Bages – just don’t think about the eye-watering markups you’ll pay in Mexico for such producers), and nice spas with lots of good fitness.

There’s pared-back landscaping and a calming white-on-ecru palette throughout the staggered blocks of suites and the one- and two-bedroom villas (available from the end of the year). The beach and Bay of Banderas views are the show-stealers. aubergeresorts.com, from $999

A secret little something coming, south of Zihuatanejo

Keep an eye out for Hotelito by Musa, which is slated to open in January on the coast of Guerrero, about 30 miles south of Zihuatanejo. The brainchild of Andrés Saavedra and Tara Medina, the Mexico City-based founders of lifestyle brand Loot, the hotel is on the same 172-acre property as the already up-and-running Casa Musa (a two-storey full service villa) and Base Camp, comprising accommodation, several multi-use lounges and public spaces, and a restaurant whose menus were conceived by chef Rodrigo Serna.

Expect an environment calibrated to the likes and needs of the digital nomad, from open-plan working spaces and a media and arts hub to a freshwater “bio” pool, beach club and ball courts – plus 13 suites (dark tropical woods, acres of gauzy white cotton) and a pool with a dedicated bar. stayatmusa.mx, from $500; book through designhotels.com

In Yucatán, join the club

Club de Patos, a 45km drive east of Merida, on the coast road in the port town of Sisal, has none of the gracious and gorgeous colonial charm of its near neighbour, but it has plenty of its own appeal (as with quite a few other fairly off-radar places Latin and South America). 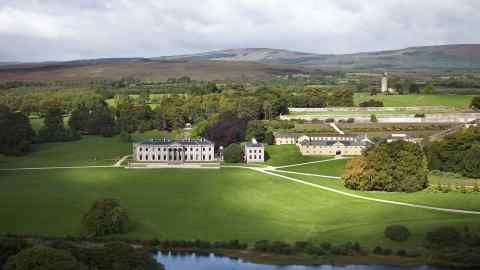 Once a hunting lodge, Club de Patos is now a hospitality-conservation project – you get a fairly low-fi but charming stone and glass, platform beds and task lamps, sexy louvred blinds and big terraces and, naturally, beautiful handmade tile floors (either modern in design or monochromatic). The food is fresh, straightforward Mexican and Italian; the beach white, calm, and blessedly unmanicured; and the El Palmar Nature Reserve, with its dozens of bird species and crocodile protection programme, is right next door. clubdepatos.mx, from about £375; book through plansouthamerica.com