Kayrros: from tracking oil by satellite to tackling the climate emergency

By monitoring energy use in real time, the French start-up says its software can help manage the transition to lower-carbon energy

The Soviet Union launched the first satellite into space in October 1957. The craft, Sputnik, was the size of a beach ball, weighed 83.6kg and orbited the Earth once every 98 minutes. Though it burnt up in the atmosphere four months later, Sputnik was the starting gun for the space race and the thousands of satellites that have launched since. Today, scientists estimate that as many as 5,000 man-made satellites are circling the planet, transmitting messages and collecting vast seams of data about the Earth, its people, and the solar system.

But, until very recently, only a sliver of that information was being used to full effect, argues Antoine Rostand, president of French start-up Kayrros, which says its novel approach to satellite imagery may be just what is needed to tackle the climate emergency.

“Being able to see what’s happening in real time everywhere in the world is something that is going to change our life,” he says, from his headquarters in Paris.

A petroleum engineer turned entrepreneur, Rostand previously ran the consulting division of US oilfield services group Schlumberger. In theory, his team had access to every piece of available information on oil and gas inventories, production levels and emissions. However, the figures were always incomplete, rendering his analysis little better than guesswork.

“I was really struck by the lack of empirical data to drive the energy transition,” he explains.

Oil companies used to estimate crude production by having staff with binoculars count the tankers in ports around the world — and, for about half a century, little changed. By the middle of the last decade, though, the launch of new monitoring satellites, improvements in computing power, and advances in artificial intelligence had opened up the possibility of much more sophisticated data-driven analysis.

Systems such as EU’s Earth observation programme Copernicus, which launched its first satellite in 2014, were taking images of the entire planet “every day or every couple of days” and making that data available for free, points out Rostand, who set up Kayrros with four partners in 2016. The five founders saw an opportunity to build computer programs that could trawl through such images to track energy use in real time.

At first, Kayrros had to “go where the money is”, which was then the fossil fuel industry. Early iterations of the Kayrros technology focused on identifying activity at oilfields, levels of fuel in tank storage and other insights sought by energy and finance executives hungry for a commercial edge. The company’s objective, however, was always to build a tool to help the world better understand and manage the transition to a lower-carbon energy system, Rostand says.

Today, the software, which he describes as a “Google Maps for industrial assets around energy and environment”, has three main uses. It is still employed by oil companies, traders and investors to track the world’s energy mix, but is also used by an increasingly diverse client base to monitor emissions and assess physical climate risks.

The team had a major breakthrough in 2020 when they figured out how to use infrared satellite images from Copernicus to accurately detect methane in the atmosphere for the first time. Methane was previously “a black box”, says Christian Lelong, director of climate solutions at Kayrros, and its detection relied largely on people, handheld devices, and assumptions.

Now, using infrared images to identify pockets of the gas (as well as computing power to reconstruct weather patterns), Kayrros can trace large methane leaks back to the source.

In a demonstration, Lelong zooms in on a leak from an industrial facility in Iraq that has drifted into Kuwait. On the Kayrros software, the methane appears as yellow clouds above a dark blue, interactive world map.

The skies over Saudi Arabia appear relatively methane free, despite the country’s large oil industry. Turkmenistan, in contrast, is “swimming” in the gas, while in Russia two smaller methane clouds above a Gazprom pipeline suggest the company is doing maintenance work, Lelong says.

Last month, Kayrros was even able to quantify the methane released into the Baltic Sea following a series of explosions on the Nord Stream pipelines between Russia and Germany, which European governments blamed on sabotage.

Such accuracy could enable governments to fine or tax methane leaks, rather than just monitor the gas’s presence. Rostand sees this as immediately useful to the US government which, from 2024, under the recently passed Inflation Reduction Act, will fine companies producing “excess” methane emissions $900 per tonne, rising to $1,500 a tonne in 2026.

Rostand says current climate governance is too dependent on trusting companies and governments to report their emissions based on their own measurements and assumptions. “We can provide the way to change climate governance from goodwill and greenwashing to actual modern capitalism, where states will be able to decide to fine people that pollute, or tax them, and investors will be able to differentiate between good and bad companies.”

Elsewhere in the battle to slow climate change, Kayrros is using its software to monitor the world’s rainforests. Using satellites that bounce a signal off the forest canopy, Kayrros can calculate the height of trees, identify where illegal felling is taking place and how well reforestation programmes are progressing. Such data are particularly useful for companies issuing or buying carbon credits backed by rainforest protection initiatives in remote parts of the world where, without satellites, it is difficult to verify whether conservation is taking place.

This type of work — data science with a purpose — has struck a chord with many young, tech-savvy, climate-conscious graduates, says Rostand, who likes to hire staff straight out of university. In eight years, the company has grown to some 180 people, with offices in London, New York, Houston, Paris, Bangalore and Singapore.

The median age of employees is around 26, and at least 30 staff have doctorates in mathematics. “We tick quite a few boxes for this generation,” Rostand says. “It’s data science, climate science, and we a have a purpose.”

The data-heavy computing work is also capital intensive. Kayrros has raised $73mn in three funding rounds from investors including former BP chief executive John Browne, BNP Paribas and the European Investment Bank. Browne, who remains an investor and a member of the Kayrros advisory board, was also an adviser to Rostand’s Schlumberger consulting unit.

“Kayrros was the first of a kind,” Browne says, noting that several other companies have tried to follow its lead. He emphasises Kayrros’s “distinctive analytic capabilities”, notably around methane detection. “It provides an important compliance offering but also data and insight for business planning.”

Kayrros says it has only scratched the surface of what can be done with satellite data. “We can see much more with technology than I thought we could,” Rostand admits. “The universe of opportunities is much larger than we expected at the beginning.”

We tick boxes for this generation. It’s data science, it’s climate science, and we a have a purpose

One of its newest tools aims to move beyond analysis of past events and to try to predict the future. By monitoring the density of vegetation, levels of rainfall, proximity to roads and common wind patterns, Kayrros is working with the US insurance industry to develop a tool that predicts the likelihood of wildfires in particular areas or around particular assets.

Another project under discussion with governments in west and central Africa would use satellite imagery to count how much rice has been planted and predict the quality of the next harvest.

“What is interesting is we see the global situation from very granular, very asset-based measurements,” says Rostand.

For example, the Kayrros software shows that industry, depending on the country, is currently emitting between three and 10 times more methane than it reports, he adds. “It’s really a game-changing technology.” 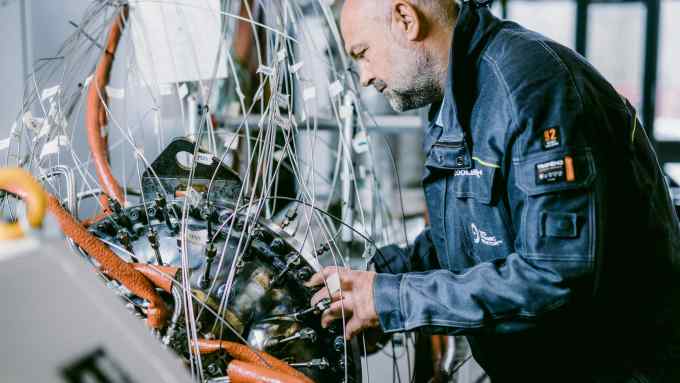