Rejina Pyo and Jordan Bourke: ‘The onus is on you to look after everyone else’

At a Korean dinner table, it’s customary to load other people’s plates with food rather than your own: “The onus is on you to look after everyone else – it’s very selfless,” says Jordan Bourke, the Irish chef and food writer. “And it means that you always get the most abundant, beautiful plate of food, because the person who’s serving you wants to impress you with their generosity.” Adds fashion designer Rejina Pyo: “You’re not allowed to pour yourself a drink either. You have to wait until someone else tops you up – but it’s not usually long!”

This sentiment feeds into their dining style at home in north London: the table is always heaving. “I hate the idea of someone wanting more,” says Bourke. “When there’s one potato left and it just sits on the plate because everyone is being too polite – I can’t stand that. There should be way more food than you need, so you never have that problem.”

‘There always tends to be something interactive in a way. It’s quite nice’ Jordan Bourke

The dishes themselves are usually influenced by Korea – where Pyo grew up – or London, where Bourke first worked as a chef. Mandu or Korean dumplings are often on the table, or dak-galbi, which is a chicken, vegetable and “squidgy” rice cake. Korean barbecue is always good for a crowd, cooking vegetables, pork belly or galbi, which are beef or pork ribs cut horizontally across the bone. “Then you serve it with scissors on the table, with lettuce leaves, rice, kimchi and sliced garlic, and people can assemble it themselves,” adds Bourke. “There always tends to be something interactive in a way. It’s quite nice, especially if there are guests that haven’t met each other before.”

For dessert, they will serve something like hotteok, a yeasted pancake stuffed with blitzed walnuts, cinnamon and brown sugar, or a frangipane tart made with chocolate and hazelnuts. “I love making it in a shallow but large tin, so when it goes down on the table, the width of it looks impressive,” says Bourke. “I think for a lot of us, how we eat and how we cook and serve food is very visual.”

HTSIHow to host it: a feasting special
The Delevingnes: “It’s big plates with wooden spoons and everyone can dig in’

READ MOREHow to host it: a feasting special
The Delevingnes: ‘It’s big plates with wooden spoons and everyone can dig in’ 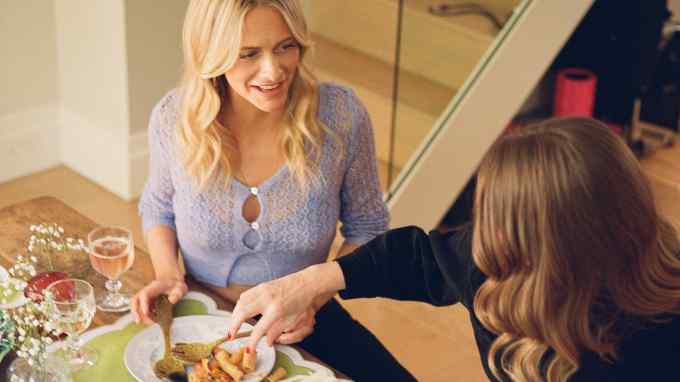