What the MatchesFashion men did next

They turned e-fashion into a billion-dollar business. Will Tom Chapman and Nicholas Pickaerts do the same for homewares with Abask?

Milan’s modernist Villa Borsani is a hive of activity. A photoshoot is in full swing as elegantly etched champagne coupes and vintage decanters are arranged on a gilded bar, and mismatched patterned plates and embroidered napkins are laid on a marble table. At the centre of the maelstrom is entrepreneur Tom Chapman, who is excitedly bringing to life his much-anticipated new design venture.

Chapman is best known as the co-founder – with his wife Ruth – of the MatchesFashion empire, which was born in 1987 as a multibrand boutique in Wimbledon and grew into a pioneering ecommerce business. It was valued at about $1bn when the Chapmans sold their majority share in 2017. Now, alongside co-founder Nicolas Pickaerts, Chapman is moving into interiors with Abask: a new ecommerce platform “conceived to shine a light [hence the name] on the most exceptional craftsmanship and design objects in the world”. It is a curation of Chapman’s obsessions, ranging from Connolly leather trays to blankets by Rose Uniacke, by way of polished-brass fireplace tools handcrafted in the fifth-generation Vienna workshop of Carl Auböck, and an intricate marquetry backgammon board by Alexandra Llewellyn, its inlaid motifs inspired by the designs of Gio Ponti.

“There’s been a buzz about this project from day one,” says Chapman, 59, as he shows me around the rationalist-style residence completed in 1945, pointing out pieces sourced from designer-makers, craft-focused brands and specialist vintage dealers. From cardboard boxes rise piles of plates, stacks of glasses and rows of cushions. Upstairs in the book-lined study, desk accessories and stationery include a superlative pencil sharpener and pretty patterned notebooks. Elsewhere, there are leather baskets and embroidered tablecloths, ceramic candlesticks and a giant globe.

Chapman is wary that this new project will be compared too closely with MatchesFashion. “I’m incredibly proud of what Ruth and I and all the team achieved,” he says, “but this is a whole new journey.” He does acknowledge that there are similarities between the businesses. “At Matches, we were known for celebrating interesting designers and emerging talent,” he says of the synergy. Pickaerts, formerly the ecommerce director at matchesfashion.com, is another link. At Matches, he was instrumental in building the site’s traffic to an annual 120 million visits.

The move into homewares was inspired by Chapman’s own experience of decorating his Los Angeles home with the interior designer Pamela Shamshiri. “We were finishing the house last summer and Pam was suggesting what they call ‘the smalls’,” he says of those final details that range from table lamps to drinking glasses. “I wanted to get involved in the process because I really believe in the impact that specific things can have on the way you feel. But it was so difficult to find pieces I felt were interesting.”

To this end, Chapman and Pickaerts have brought on board Bryony Sheridan, the former buying manager of home and interiors at Liberty London, as well as interior designer Hubert Zandberg as style director, and the Abask idea has gone from inception to launch in just 10 months. In this time, the team has pulled together an offering that includes well-known heritage names and small artisan makers, as well as a selection of vintage finds. In some cases, the products are being produced exclusively for Abask. “We’re launching with 2,000 products,” says Chapman. “We have 105 brands. We’ll have 150 by December – and will keep building.”

The initial selection will be divided into four sections by room: the study, the bar, the dining room and the games room. “I love the idea that everything is useful as well as beautiful, and I think the selection is very interesting,” says Osanna Visconti di Modrone, a Milanese creator whose sculptural brass objects will be part of the Abask line-up, including pomegranate paper weights and textural candle holders cast to resemble molten wax.

A lot of the time, we are exploring the brands’ archives to offer something unique

Chapman does not want to be a Harrods or a Saks. “We want to share the great makers out there that people haven’t heard of,” he says. Touring the villa, I make several new personal discoveries: Nick Plant, a British maker of contemporary backgammon sets; Perla Valtierra ceramics from Mexico, whose heavy, matte-black plates have tactile pinched edges; and Los Vasos de Agua Clara, a Barcelona-based female duo who started producing playfully painted drinking glasses just four years ago.

“There’s a lot of glass,” says Sheridan, highlighting pieces made by the over-200-year-old Austrian glassmaker Lobmeyr – from a modernist, monochrome cocktail set by turn-of-the-century Viennese designer Josef Hoffmann to the contemporary colour-pop tumblers created by Martino Gamper. Murano makers also feature heavily: glasses by Nason Moretti are a revived archive design from 1988, while the undulating Venini Fazzoletto (handkerchief) vase is offered in exclusive transparent shades and stripes, rather than the usual opaque finish. “A lot of the time, we are exploring the brands’ archives to offer something unique,” says Sheridan of a number of exclusive reissues.

For Leonid Rath, managing partner of Lobmeyr, and the sixth generation to helm the family firm, the common factor among the Abask selection is “authenticity”. They’re all “brands who stay true to their mission – with passion”, he suggests. And preserving traditional craftsmanship is a key objective in Abask’s mission statement. Another is to “celebrate the incredible stories behind each piece, person and place” – something that will be achieved on the website, says Pickaerts, via “meet the maker” sections featuring interviews, video and photography. “Digital allows us to really explain about the craftsmanship,” says Chapman, picking up a brass foot by Carl Auböck. “We can’t tell you how a piece feels online, of course. But we can show you Carl Auböck in his workshop, and he can tell you about his design process.”

The website will also provide inspiration as to how people can use the pieces in their own home, says Zandberg. “We want to give people the tools and the confidence to mix and juxtapose different styles, and to have fun with it,” he says giving the example of pairing the very classic, floral-adorned Zoë de Givenchy tableware with the more graphic, snake-illustrated plates by Laboratorio Paravicini. 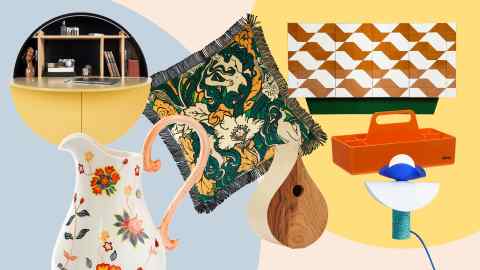 “It’s very important for us to be global,” adds Chapman, citing brands from Japan (Edo Glass) to Ghana (The Baba Tree Basket Company). In terms of the size of their offering, they’ve plotted out a rapid expansion plan. “Every eight weeks we’ll launch another room,” says Chapman. “The next one will probably be the kitchen, which is going to be fun. The bedroom is a big one: think linens and international bed sizes.” Other “rooms” will be less literal, including a “candle cabinet”, a “rug basket” and a space dedicated to ceramics. “We won’t do furniture, though,” concludes Chapman. Never, I ask? “Well, never say never about anything,” he laughs. 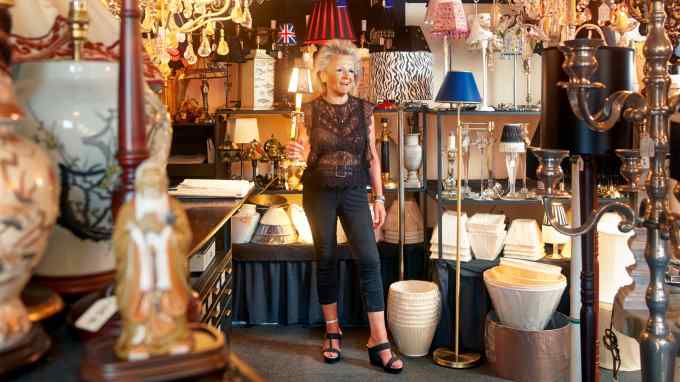