We’ll send you a myFT Daily Digest email rounding up the latest Cars, bikes, planes and boats news every morning.

Sixty years after the last Isetta Bubble Car rolled off the production line with its unique front-opening “fridge door”, the design icon is coming back to life, thanks to a reimagining by the man behind the Micro Scooter phenomenon.

Swiss inventor Wim Ouboter transformed short-distance travel by turning the toy scooter into a collapsible aluminium version for adults and launching a new generation of three-wheeled mini scooters for kids that have since become ubiquitous on pavements around the world. Now he hopes to trigger a similar revolution in the electric-car market with his super-lightweight car for two called the Microlino.

“Scooters got people moving and have saved countless unnecessary car journeys,” says Ouboter, 62. “I believe that a similar change in mindset is now vital for urban car travel in order to radically reduce CO2. The day must come when it is considered unacceptable for just one or two people to sit in a SUV for a local journey. I see that habit as similar to wearing fur coats in the past.”

How much car do you really need?

Ouboter, a onetime banker from Zurich, launched his first scooter in 1997 and since then has sold 50 million scooters in 30 varying models, a business that has generated more than £600mn. He has operations working under licence in 80 countries. He has ploughed an unspecified multimillion-pound investment into his car project that has pivoted around the central challenge: “How much car do you really need?” Micro says that the average car is occupied by only 1.2 people and driven just 35km a day – meaning normal cars are too big for 95 per cent of their usage. The Microlino strips out everything deemed unnecessary. It uses 60 per cent fewer parts than a conventional car and, weighing only 496kg, it is 55 per cent lighter than standard models. It is so light, Ouboter says, that it generates one-third of the CO2 per mile compared to other small electric cars.

The Microlino was inspired by the dinky Isetta, which was originally designed in Italy and first released in 1953. It only became a motoring sensation after BMW began mass-producing it in 1955 to make cars affordable in the postwar era. And even though it was a budget runaround, it was fêted by Hollywood legends such as Cary Grant. More than 161,000 were sold until it was discontinued in 1962.

Ouboter’s Microlino began life in 2015 with his two sons – Oliver, 28, and Merlin, 27 – driving the idea forward. The family already owned a vintage 1956 Isetta and they hit on the idea of redesigning it for the 21st century. After some delays, the launch model has just started to come off the assembly line in Turin. Fittingly, as a nod to Ouboter’s scooter trailblazing, it is called the Pioneer.

At 2.52m long and 1.47m wide, the car has inherited many of the Isetta’s charming characteristics: three Microlinos can cross-park in one standard space. It also has the same front-opening door, so the driver can exit straight onto the pavement. It has a top speed of 90kmph and accelerates from 0-50kmph in five seconds. 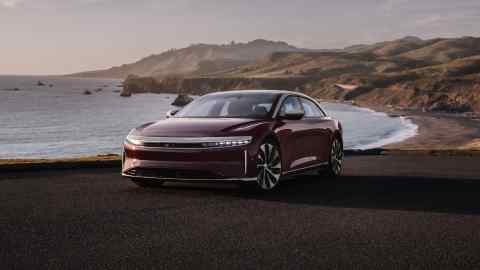 Due to the lack of bonnet, the passenger cabin has a sturdy steel frame and a reinforced-steel front door that has scored better than other mini cars in head-on collision safety tests. It has a maximum range of 230km and fully recharges in four hours from a conventional domestic plug socket.

Like the Isetta, the Microlino is pitched to be affordable with an entry price of £13,200, rising to a maximum of £19,800. Ouboter adds: “We want this to be the first second car. People will always have big cars for long journeys, but they can have a Microlino for the city.”

More than 36,000 prospective buyers have already registered (for free) to buy a Microlino, but only 500 will be made this year for customers in Switzerland, Italy and Germany. This will rise to 5,000 next year, with it arriving in the UK by the spring. Scaling worldwide production will involve factory partners in each country to negate the carbon footprint of transportation.

Ouboter hopes the Microlino will become something of a fashion statement. In an echo of that sentiment, the first car to be delivered in Italy was bought by a senior director at Gucci’s parent group Kering as a 60th-birthday present for the fashion label’s CEO Marco Bizzarri. Given that he towers above everyone around him, if he can fit in it anyone can.