Global investors are largely spurning a searing rally for China stocks, with exchange data and market participants pointing to Chinese traders as the main driver of world-beating share price gains amid hopes that the end is nigh for the country’s strict zero-Covid policy.

Over the past week, Chinese stock benchmarks have shot higher in response to unconfirmed rumours that Beijing is on the verge of a major pivot that could see China reopening to the rest of the world as early as the first quarter of next year.

Hong Kong’s Hang Seng China Enterprises index has risen almost 13 per cent from its recent nadir, leaving the gauge just shy of its level before the sell-off sparked last month by Xi Jinping’s consolidation of power at the Chinese Communist party congress. Xi’s stacking of the elite seven-member Politburo Standing Committee with his own people prompted market fears that the president’s signature policies, including zero-Covid, were unlikely to be relaxed any time soon.

Investors and traders in China and Hong Kong said the latest rally was driven primarily by Chinese buyers, with foreign institutions yet to return in force to mainland markets after last month’s round of record selling.

“When you see an indication of reopening, local investors react to that very quickly and very strongly,” said a director at one Chinese brokerage in Shanghai. “It’s a very different angle from international investors, who are still looking at this as a market with too many unknowns.”

That reticence is reflected in flows through Hong Kong’s stock connect programmes with Shanghai and Shenzhen. Despite a recovery rally for the country’s benchmark CSI 300 index of large and liquid mainland stocks over the past week, a Financial Times analysis of stock connect data shows offshore investors have become net sellers of mainland Chinese stocks for the year to date.

“The question of what size of investment to have in China is currently a terribly difficult one,” said the chief executive of one of the world’s largest alternative investors, on the sidelines of a financial summit in Hong Kong last week, as Chinese shares listed in the city were rocketing higher on reopening rumours.

He added that foreign institutional investors faced difficult choices on how much exposure they wanted to China, relative to a neutral weighting of “about 15 per cent” based on the size of its economy.

“If you’re a US investor in China and the US government says all investments in China are now covered by whatever new rule, and you have to write them off . . . or if China goes into Taiwan, any US or European investor is going to have to write off their China assets to zero,” the person said. “And 15 per cent, you just can’t do that.”

While foreign investors using the stock connect scheme have dumped about $7bn of Shanghai- and Shenzhen-listed shares since the conclusion of the party congress, mainland Chinese investors have bought almost $12bn worth of Hong Kong shares over the same period.

Traders said the main driver of buying in Hong Kong over the past week was money from the mainland, where investors view the city’s stocks as undervalued compared with those onshore and the renminbi’s fall against the greenback has made owning dollar-denominated securities more attractive. Recent sessions had even seen some limited participation by long-only investors, they said.

“Interestingly that long-only action was not coming out of the US,” said Andy Maynard, a trader at the broker China Renaissance. “It was much more regional, and mainland-based asset managers putting money to work.”

Mainland buying of Hong Kong shares has continued despite repeated statements by top officials denying any imminent change in Covid-19 policy. Strategists at international investment banks have begun to game out what a serious shift in policy would look like for markets, with a report from Goldman Sachs this week estimating that full reopening could drive a 20 per cent rise for Chinese stocks.

“One more factor driving the rally is China’s re-engagement with the world, as Xi made a slew of public appearances last week,” said Tommy Xie, head of Greater China Research with OCBC Bank. 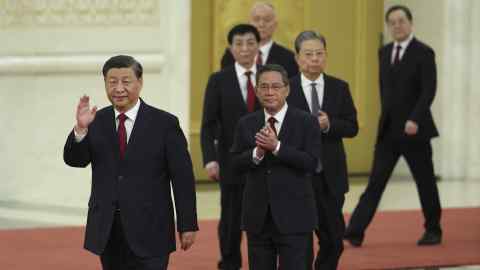 But experts warn that any planned relaxation of the strict Covid rules would have to be gradual and require policymakers to ensure the country is ready to end roughly three years of zero-Covid. That includes ensuring a sufficiently high vaccination rate among the country’s elderly population.

“The most likely trajectories now are a controlled reopening supported by medical advances, or a chaotic reopening forced by an out-of-control epidemic,” analysts at Beijing-based Gavekal Dragonomics warned this week. “In the coming months, the government’s actions, more than its words, will provide the best indicator of which trajectory is the more likely.”

“Rarely does China investing hinge on a single binary question. Rarely have we seen such controversy on China’s economic future,” Wang said. “China reopening is what investors care the most about right now.”