“Series 1790 Collection Number Two” is a bespoke humidor packed with 61 special-edition Ramón Allones cigars. In effect, it is a greatest hits of rare and sought-after cigars, ranging from the fabled Belicosos of 2005 – a unicorn cigar made for the UK market and now so scarce that just a single example is included here – to the Private Stock 230 that will launch in the UK before the end of the year.

The collection is a snapshot of the past 17 years of special-release Ramón Allones cigars, and it has been assembled and boxed by UK Cuban cigar importer Hunters & Frankau drawing on its “House Reserve” of aged stock (about £33,000). “About 20 years ago we started to set a few boxes aside from the first shipments of new cigars,” explains CEO Jemma Freeman. “But we discovered that special editions carry on being of interest to collectors long after launch. These are for the type of collector who has to have everything.”

Mixed assortments of special cigars are occasionally put together in Cuba, and special one-off collections are created for the annual charity auction in Havana. However, House Reserve is a UK initiative and Ramón Allones has a long history in Britain. At a preliminary “tasting”, it is with no little trepidation that I light up one of the new Private Stock 230 cigars. To my delight, the application of the flame releases a chorus of harmonious flavours and heavenly sensations across my palate: some silky, some creamy, others almost honeyed. Seldom, if ever, has Ramón Allones been so urbane.

This is the second such compilation to be put together from Hunters’ House Reserve. The first appeared in 2019: a truly gargantuan humidor containing 170 cigars, 10 each of all the regional editions made for the UK since 2007. And plans are well under way for collection number three, a single humidor unassumingly referred to as Cohiba Collection of the Century. It will probably rank as the ultimate greatest hits compilation. Among the treasures that will be found behind the double doors of this wardrobe-like humidor are boxes of 25 each of the Cohiba Piramides of 2001, the Cohiba Double Coronas of 2003, and the Cohiba Sublimes of 2004: three of the greatest cigars ever made in Cuba this – or for that matter any other – century. The line-up includes genuinely exclusive stuff. Some, like the Cohiba 55 Aniversario of last year, I have never tasted; others, among them the Cohiba Esplendidos Gran Reserva, I have never seen; and I had never even heard of the Cohiba Siglo de Oro. 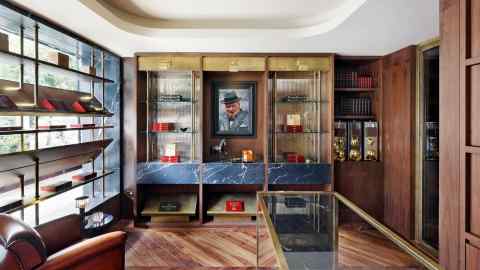 The cost of this, the ultimate greatest hits collection, will be somewhere in the high six figures. But whether the price is utterly unaffordable or merely outrageous, it will make the Ramón Allones collection seem seriously under-priced… especially if they are all as good as the Private
Stock 230.