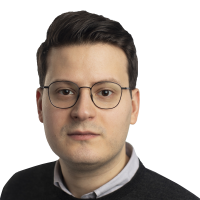 Joe Miller is the Financial Times’ legal correspondent in New York, covering the business of law, litigation and the so-called white-collar bar, among other legal topics. He also co-writes the FT's Full Disclosure newsletter.

Joe previously covered the titans of German industry as the FT's Frankfurt correspondent. During his time in Germany, he also covered BioNTech’s Covid-19 project in real time, accompanying scientists in Mainz as they and Pfizer brought the world’s first approved vaccine to market in late 2020. His book on the record-breaking feat - “The Vaccine” - was translated into twenty languages.

Prior to joining the Financial Times in 2019, Joe spent six years at BBC News and the BBC World Service, working first in the London newsroom, and then as a correspondent in New York, Delhi and Berlin. He has a degree in English Language and Literature from the University of Leeds.

Previous page You are on page 1 Next page
Financial Times